278. New Version - Context Voice
278. Why Using Horus Micro Framework ?
278. Zest PHP Framework Benefits in 2019
278. How Can PHP Run SQL Query Just By Accessing a Class Variable
278. How to Have a Laravel Pages Package to Create and Manage Web Pages for Each Object of Model Class

Dependency injection is a design pattern that is implemented in many of the modern PHP frameworks because it helps organizing better the code of multiple components that depend on the same service of information or behavior.

Read this article to learn what is dependency injection and inversion of control and how it can be implemented in PHP to benefit your projects' structure. 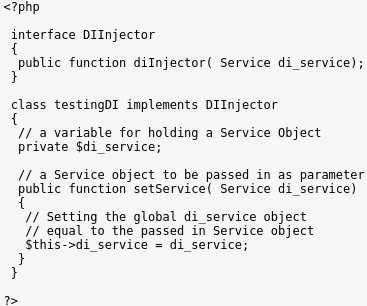 Dependency Injection is an object oriented design pattern that you come across when extending application frameworks logic. It has to do with "more than one class (object) depending on the services of another".

There are lots of articles, tutorials, explanations on the Dependency Injection design pattern. They also mention Inversion of Control. It is based on the popularly known Hollywood catch phrase, "Don't call us, we'll call you".

Those articles often have two things in common: its either their base of explanation on a particular technology (such as Java or C#) or they delve into highly detailed concepts without explaining the main concepts behind the dependency design principle.

This article aims to bridge those gaps by explaining the main concepts behind Dependency Injection (Inversion of Control) design pattern, explain its advantages when compared with other alternatives and list the challenges that you may be faced when using it to write applications.

In normal everyday object oriented application development, a dependency object is passed to a dependent object directly. This may result in lots of issues such as tight coupling, less flexible and reusable code, among others.

Dependency Injection and Inversion of Control Containers are meant to solve these problems by making the dependent object (client) call a dependency when needed. This makes it very easy to develop robust, independent and reusable object oriented class services.

Let me illustrate these concepts with a quick example of a car class object that is dependent on an automobile class.

The snippet above defines the automobile class which would act as a parent to the car class. Normally, the car class object would be defined this way:

Similarly, in interface injection, the client (dependent object) implements an interface which defines how a dependency should be accepted and set. An example is illustrated below:

Dependency Injection helps to create software that follows the dependency inversion principle. The Dependency Inversion Principle is a common way, especially with object oriented designs, of decoupling various part of a software module into individual entities.

Following this principle means that the Client (the dependent object) does not need to know how to construct it's dependencies, it's the injecting code that constructs the services (the dependencies) and injects them into the client

In the next article, we look further into the various ways of implementing Dependency Injection. We would talk more about the Controller Injection, Setter Injection and Interface Injection approaches and how they can be useful in various scenarios.

We will also talk about IoC Containers and how to build one for better software reusability, maintainability and testability.

If you liked this article or you have a question about the presented dependency injection concepts, post a comment here.