PHP is so popular that sometimes fans of other languages question if PHP is still that popular in the hope that PHP developers move on to the languages of their preference.

The fact is that PHP continues to be so popular that large companies have still great demands for qualified PHP developers.

Read this article to learn about some of the high growth companies that continue to look for great PHP developers.

One of the most-viewed questions on Quora is “Should I learn PHP today? Is it still worth it? The answer, resoundingly: Absolutely yes.

Not only is PHP used by most top ecommerce sites (i.e., Etsy), it also powers the majority of the Web pages on the Internet today.

Most importantly, PHP is one of the most sought after programming languages by high growth companies looking to staff up their engineering teams. Here are 10 incredible startups actively hiring engineers with PHP experience - found on Hired. 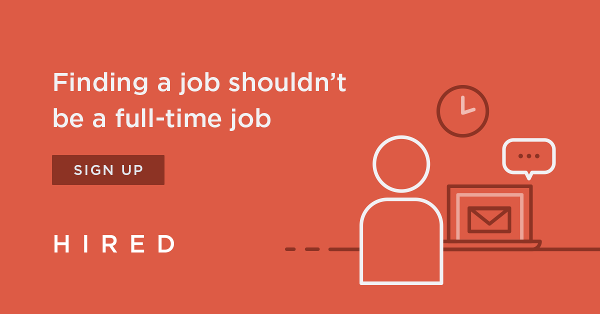 Barkbox is a NYC-based subscription doggie treats service with a projected $100 million in annual revenue. Following the latest $60 million funding round, Barkbox has been renamed Bark & Co — and is seemingly aggressively investing in the development of ancillary Bark products.

More than 700,000 patients have been treated by Dr. Ed’s online doctor service. In addition to an incredible, ambitious vision, Dr. Ed provides all employees with ample awesome perks — including flexible hours and 10% protected time for employee passion projects.

Founded in 1995, this Toronto-based startup has raised more than $52.4 million in funding to build recognition and rewards software to increase employee satisfaction and performance.

This San Diego-based app developer platform is one of the largest white label app development providers on the market, with over 500,000 apps created with Bizness Apps software.

Quartzy is a platform and marketplace for laboratory scientists headquartered in Palo Alto, CA. Noticing a lack of supply-chain and management tools to make the lab process more efficient, co-founders Adam Regelmann and Jayant Kulkarni set out to build much-needed missing tools. Quartzy most recently raised a $15 million Series B round in December 2015.

MyBuilder is a marketplace for builders and tradespeople, connecting homeowners with skilled contractors they wouldn’t otherwise have access to. More than 20,000 people post an average of 400,000 contract jobs every month. In addition to its two-sided marketplace mechanics, MyBuilder functions as a review site; all contractors receive ratings from the people who hired them.

London-based Badoo is equal parts WhatsApp, Tinder, and Meetup. The app, founded in 2006, now serves over 320 million people in 180 countries and is the 281st most popular website in the world. This sustained up-and-to-the-right trajectory shows no signs of stopping; Badoo reportedly adds 400,000 new users every single day.

Lafourchette (when translated, means “the fork” in English) is an online restaurant reservation service serving 12,000 restaurants throughout Europe. Founded in 2007, Lafourchette has been profitable since 2013, after which they were quickly swooped up and acquired by TripAdvisor.

The fastest growing fashion brand you’ve never heard of, The Iconic launches an astonishing 200 new products per day (a la Zulily). Founded in 2011, the online fashion and sportswear retailer is expected to pull in $100 million in sales in 2016 and plans to reach profitability by 2017. The Iconic has raised $120 million in venture funding to date.

Founded by PayPal co-founder Max Levchin, Affirm is an online alternative lending site. Thanks to a Series D windfall (of $100 million) in April 2016, Affirm’s total funding raised amounts to $420 million. The latest round of funding is reportedly earmarked for staffing up the product and engineering teams in order to build new and ancillary products outside of loans.